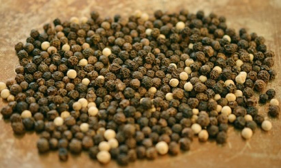 Pepper is one of the oldest spices known and has been called both the ‘king of spices’ and the ‘pearl of spices’. It was so valuable at one point in history, that it was even used as currency. The pepper plant (piper nigrum) originated in India and production has now expanded to Vietnam, Ceylon, Indonesia, Malaysia and Brazil.

The Difference Between Types of Peppercorn

Pepper has long been used in ancient Indian medicine to treat various conditions such as gastric ailments and asthma. However, scientific research is lacking. Pepper is best known to reduce the secretion of acid in the stomach and therefore is thought to help with indigestion. Furthermore, pepper has proven antioxidant properties and may enhance the absorption of other phytochemicals in other spices. Animal studies have shown that it can prevent heart disease, diabetes, inflammatory diseases and cancer, but human studies have not been completed as yet. Also, pepper has antimicrobial effects and can be used as a preservative and a non-toxic deterrent for insects and rodents.

In cooking, pepper is versatile. When added near the end of the cooking process pepper will enhance most dishes. It is delicious used as a crust on meat and chicken and pairs wonderfully with lemon juice on fish, chicken and vegetables. Freshly ground black pepper on strawberries or watermelon adds a modern touch.

Piperine is the active ingredient in pepper and is responsible for the pungent properties we associate with it. Piperine becomes less active once the peppercorn is ground so best to grind your peppercorns freshly.

This recipe makes delicious chicken breasts without all the added preservatives, salts and sugars found in shop bought sauce. The chicken can be sliced and served with salad as a light meal or main meal and makes great leftovers for lunch the next day.

Ring the changes: Use this sauce as a marinade for other meat and fish and try it as a dressing for steamed green vegetables.